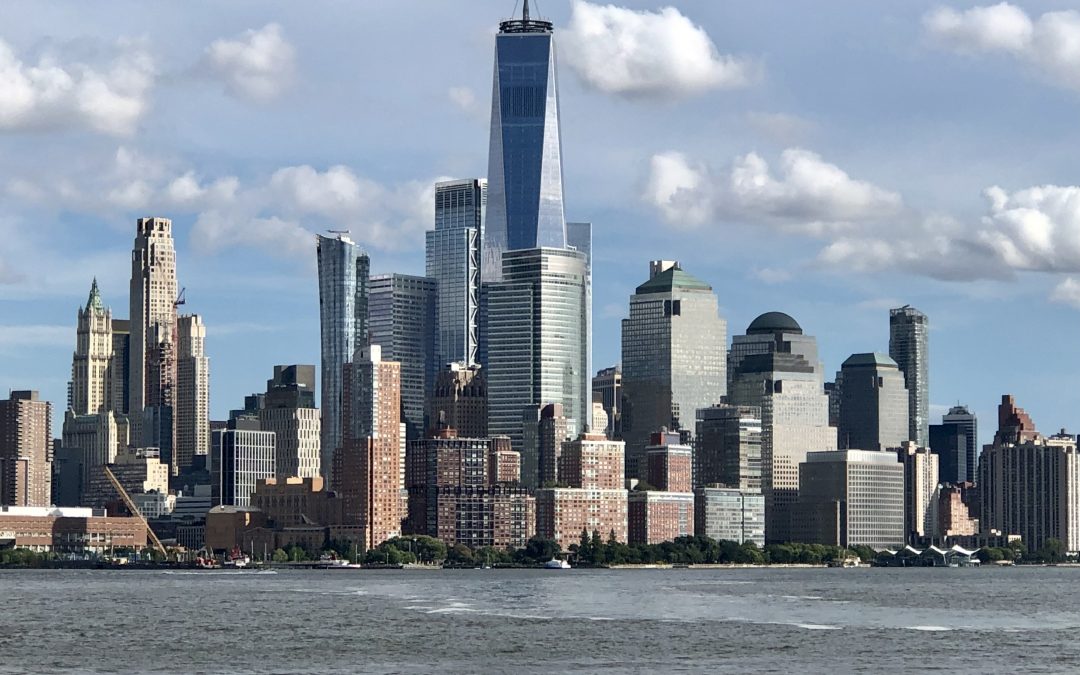 On September 11, 2001, the quaint, square-mile, urban town of Hoboken, New Jersey found itself right smack dab in the middle of the chaos. Located on the banks of the Hudson River overlooking Manhattan, Hoboken serves the entire state as a very important transportation hub. New Jersey Transit trains deposit tens of thousands of commuters every day into the historic train station built in 1907. From there, the city-bound workers catch ferries, buses, and the underground PATH train system to complete their journeys. It is the same today as it was on 9/11. The picture above is the modern-day view of lower Manhattan from Hoboken. 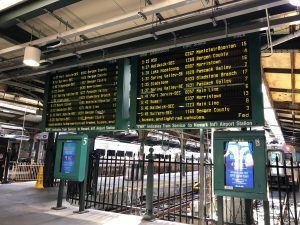 The Big Board within Hoboken’s old train station. On 9/11, trains would all be cancelled soon after the towers were hit.

Due to a postponed meeting from the prior week with our largest client, Wells Fargo Wealth Management, I was eventually destined for JFK at 4pm on that infamous day. Thankfully, my frugality had me summarily reject a straight re-booking with my normal morning United flights to San Francisco, which had soared in price due to a last minute travel change. That skin-flinting behavior of mine prevented me from possibly being aboard United flight 93 that would end in Shanksville, PA later that day. It was one of three early morning United flights that I often took westward.

Due to my late afternoon travel, and likely late night on the west coast, I packed that morning for my three-day trip and even had a rare breakfast with my ten- and eight-year-old daughters. I caught a later train and found myself arriving in Hoboken at precisely 8:45am. The North Tower of the World Trade Center would be struck by American Airlines flight 11 one minute later—but the impact would occur without my immediate knowledge. Still in the dark, I would be stymied by the PATH’s suspension of its underground rail service, and immediately shifted my attention to the ferry. Above ground, as I headed for the boats, I could see everyone was gazing and pointing eastward toward lower Manhattan. I suddenly saw what they were so keenly watching. The North Tower was ablaze. The then-current theory was that a small plane had accidentally impacted the tower. How horrible! I thought.

Not One Tower, but Two! 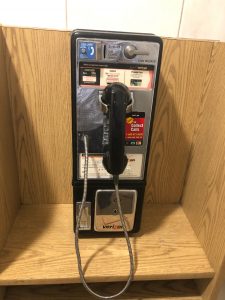 My flip phone was not usable on 9/11 for local calls. I quickly resorted to the old fashioned method.

If there was any good news, it was that I was headed for the other tower – Two World Trade Center – the South Tower. I quickly tried reaching some of my colleagues—I was Baseline’s chief operating officer. Calls to my CFO and head of Sales went to voicemail. I wasn’t worried about them…yet. I then made a very fateful call to my wife. As I was dialing her, she was watching the events unfold on LIVE television. By the time she said “hello” United 175 had flown directly into floors 78 through 84 in my building. We occupied floors 77 and 78. An excerpt from my book, Undaunted, highlights the phone call:

She answered the home phone and literally started screaming the moment she heard my voice.

She had just watched the second plane, on live television, tilt its wings and fly directly into my building from the 78th to the 84th floor—on the same south side of the structure as my office. From her viewpoint, it must have hit my office on 77. She hadn’t focused on my purposely delayed commute that morning, and so believed that I was sitting at my desk.

I still had confidence that what I had seen was simply an accident and that she mistook which building was mine. I began to dissuade her of her information.

“Oh, no hon. That’s not my building! I’m in the other one, and it looks like a Cessna—”

She cut me off harshly. “No! Two jumbo jets have just flown into the World Trade Center! They were probably hijacked. This is horrible. Get home now!”

My mind went instantly to mush. My wife’s emotions and vehemence were clear. She repeated the cold hard facts. I dropped the phone and just left it dangling by its cord. Anger, fear, and sadness gripped me all at once. 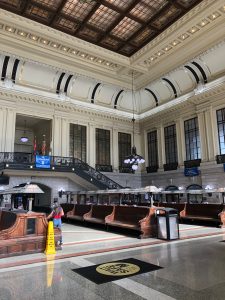 I placed those phone calls from a pay phone inside the stately Hoboken Station.

While my day would get perceptibly worse when I eventually heard of my building’s collapse, this was (up until that point) the single worst moment in my life. I certainly felt everyone I knew at Baseline had just died. I rushed outside to catch a taxi back home…my next train wasn’t until 10:30am, but would eventually be cancelled. A cab was my only hope.

My Oblivious, then Purposeful, Taxi Behavior

The streets of Hoboken were reminiscent of an old Godzilla movie. Police cars, fire engines, and ambulances were jockeying with crazed pedestrians for dominion over the roads. The word “order” had lost all meaning. Another excerpt shows the state of people’s minds—including my own:

I saw a taxi and hailed it. However, before I could get in, someone grabbed me from behind. It was a police officer who said, “Get off the street and get in the taxi line!” How I had completely ignored, nor even seen, the 200 people already queued up for a cab ride was a shocker to me. A subliminal desire to survive and get home apparently had me block those very visible and dutiful commuters from my conscious mind. Anyway, now dejected and facing reality, I slumped back towards the curb. Incredibly, as I crossed the median the same cabbie pulled up alongside me and said, “Get in!” He knew I had intended a longer ride and probably concluded a larger fare and tip would be forthcoming. Possessed with feelings of getting home, I didn’t reflect too long on the line behind me. As I opened the door, however, I was knocked completely into the taxi by the same throng that wanted the next available cab ride. Shortly, there were seven men in this cab—a picture right out of the Guinness Book of World Records, often involving VW Beetles! None of us were sitting in any recognizable position. I was lying prone across the drive train on the floor of the backseat. The cab driver yelled, “I’m not going anywhere!” Some guy on top of me in that scrum suggested we’d each pay him $30, and the cabbie shifted the car into drive and said, “Where are we going?” Good ole capitalism. Fortunately, we were all from Bergen County and so northward we went. 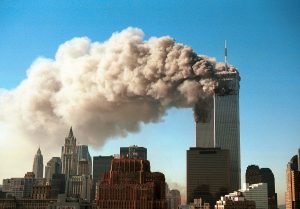 My new reality as I departed Hoboken on 9/11.

The seven exasperated men became a terrific support group when the other six heard the story of my colleagues high up in the South Tower. As we drove north, we could see both towers were seriously ablaze. In the next few hours I would suffer a further drop in emotional stability when my tower fell killing anyone left alive at that moment. By mid-afternoon, I started hearing stories of survival which instantly began to warm my spirit. In the end we sadly lost four terrific individuals — Jill, Ruth, Bob and Steve — murdered at the hands of evil. However, amidst the despair, the resolve of the remaining 200 associates to rebuild was nothing short of astonishing. Undaunted is our complete story.

The book is not just a somber reminder of 9/11, but it also stands as an example of American resolve to overcome horrible adversity. It not only details the stories of those on floors 77 and 78 that morning, but it also chronicles the resolve of the survivors. I hope you will read it. It will be released on 9/11 itself–the 20th anniversary. 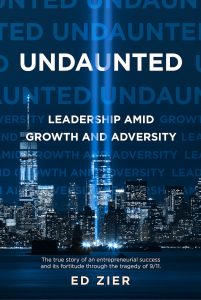